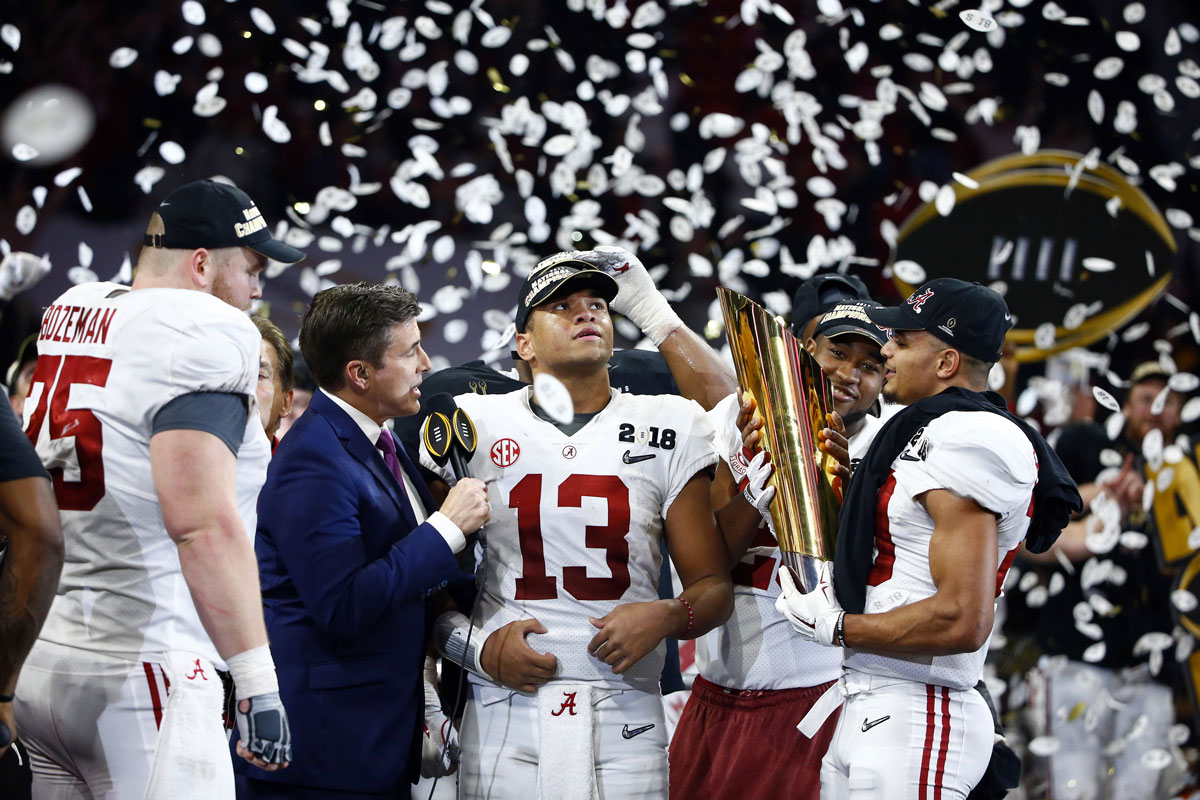 But which ones stand above the rest?

Below, we’re ranking the top five performances in the first half-decade of the CFP National Championship. A player from each of the first five games is included in this list.

Nobody saw Trevor Lawrence coming, and he used that to his advantage.

After taking over the Clemson starting quarterback job midseason, nobody saw a freshman quarterback leading the Tigers to the biggest blowout win in the 5-year history of the CFP National Championship. But Lawrence did just that.

Against an Alabama defense loaded with NFL talent, Lawrence dominated the opposition, throwing for three touchdowns and 347 yards with a 10.8 passing yards per attempt.

Lawrence looked inhumanly composed considering his experience and pushed himself into the conversation for an NFL Draft that he was still years away from being eligible for.

The legend of Tua Tagovailoa was conceived at the most improbable time — halftime of the CFP National Championship.

He was right, as Tagovailoa charged the Crimson Tide back and tied the game 20-20 at the end of regulation.

Then in overtime, after Georgia hit a field goal on their first possession of the extra period, Tagovailoa connected with DeVonta Smith on a 41-yard touchdown pass to win Alabama another championship.

Tagovailoa finished the game with three touchdowns and 166 passing yards in a little over half a game.

Crimson Tide tight end O.J. Howard put on the greatest receiving performance of the CFP era with a 208 receiving yard and two touchdown night. Howard gave Alabama the lead twice in the matchup — first with a 53-yard touchdown in the third quarter and then a 51-yard touchdown with 9:45 left in the fourth quarter to give the Crimson Tide a 31-24 lead.

The game got crazier from there, but Nick Saban and company have Howard to thank for his monumental performance.

The most dominant rushing performance in the young life of the CFP National Championship was orchestrated by college football's most tantalizing back of the decade.

In the first edition of the CFP National Championship, Ezekiel Elliott drove Ohio State to a blowout win over Oregon with 246 rushing yards and four touchdowns on 36 carries. Quarterback Cardale Jones also put out an impressive performance, but it was the running of Elliott early that turned the game from a one-possession affair to a runaway victory for the Buckeyes.

Clemson needed a legendary performance to finally get over their Alabama hump and they got it with Deshaun Watson in the 2017 CFP National Championship.

One year after failing to capture the title from the Crimson Tide, Watson and the Tigers got a shot at revenge. After trailing 14-0 midway through the second quarter, Watson put the game into his own hands and led a comeback effort for the record books.

In total, Watson threw for 420 yards and three touchdowns on 56 attempts. But, most importantly, Watson hit Hunter Renfrow with a 2-yard touchdown pass with two seconds remaining in the fourth quarter to win their first title since 1981.